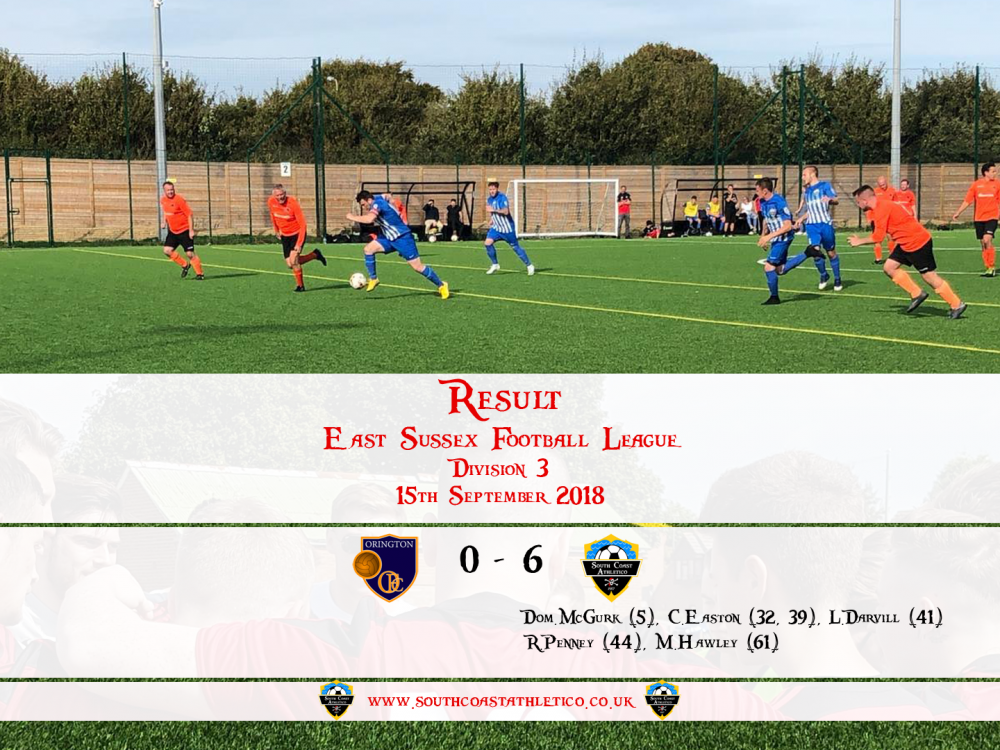 Chopbacks bounce back in style

After throwing away last weekends game,  The Chopbacks had to pick themselves up and respond.

Orington on a fine Saturday afternoon had no idea of the reaction they were about to sustain.

It took 5 minutes for Dom McGurk to open the scoring with a thunderous effort the keeper had no chance of saving. 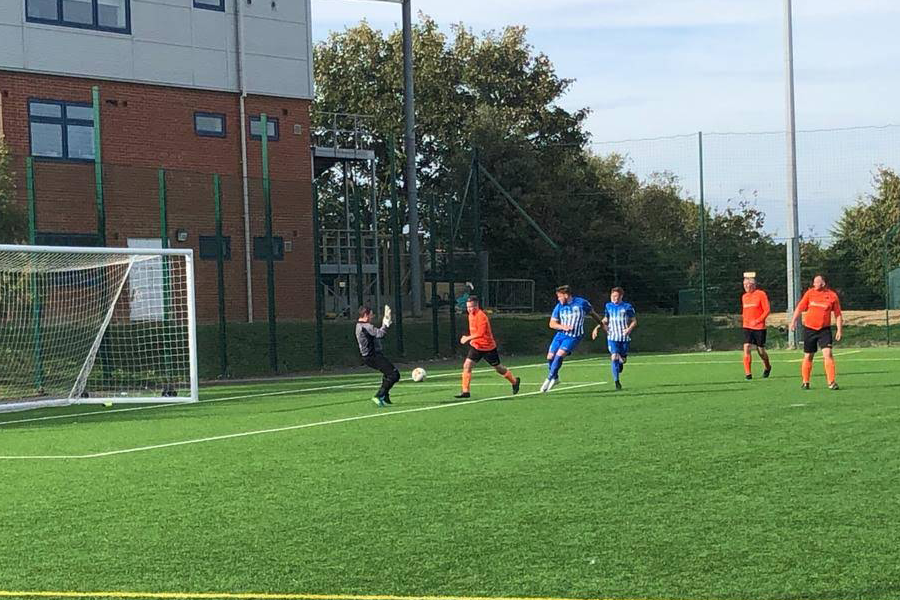 The Chopbacks immediately stole the ball from the restart, a shot unleashed to be parried by Oringtons keeper to conceive a corner.

The corner was delivered well,  fell into the box and another shot saved.

Orington fought their way into the Coasts defensive third and were awarded a free kick from a sloppy challenge. 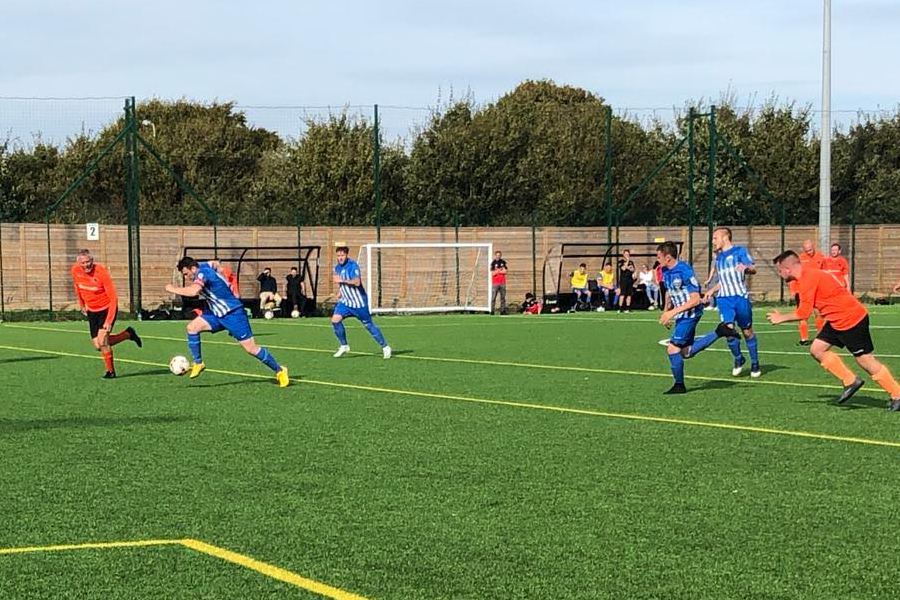 The resulting free kick was well taken,  straight off the training ground but miss controlled by the receiver resulting in nothing.

Orington now had a higher intensity and pressed to get a goal,  their only real effort was a good strike but straight down the throat of the posturing Cat that is Ben Tate, who held it with routine confidence.

This woke the boys up and they switched up a gear and began an onslaught that with the exception of another wasted Orington free kick would last the rest of the game. 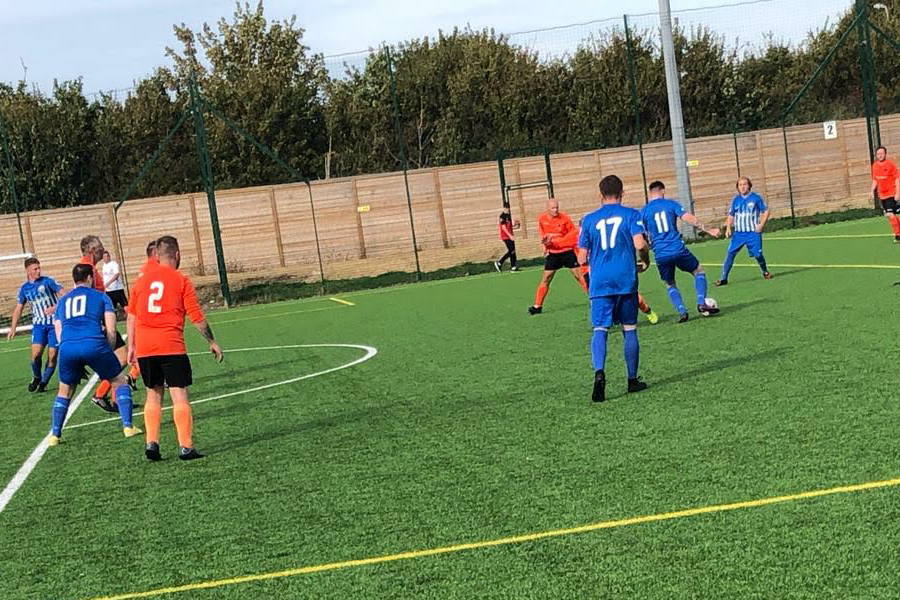 15 minutes again Dom Mcgurk picked up the ball 30 yards out and smashed it at the Orington goal, only a piece of inspiring goal keeping would have matched it and that’s exactly how it played out stinging the keepers hands.

2 minutes later Luke Darvill was released to go one-on-one with the Orington keeper and slightly over hit the crafty chip to see the ball sail over the cross bar.

Luke was determined to make amends and at minute 21 fired a long range effort drawing a quality save. 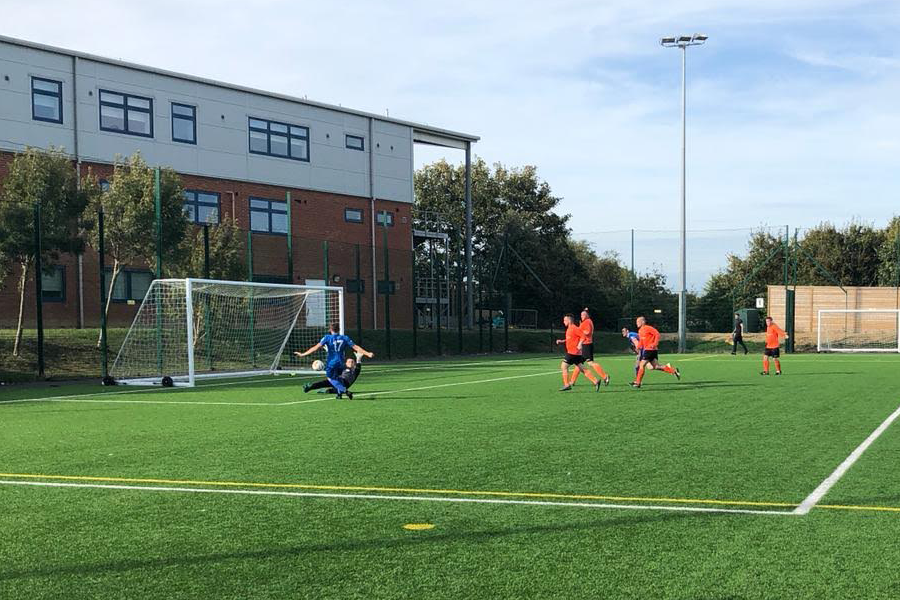 A minute later saw a rare appearance of Orington in the Chopbacks area as a defensive misjudgement allowed the Orington forward to pinch the ball steering it towards the goal.

Fortunately Super (Connor) Smithy flew in to clear the ball off the line. 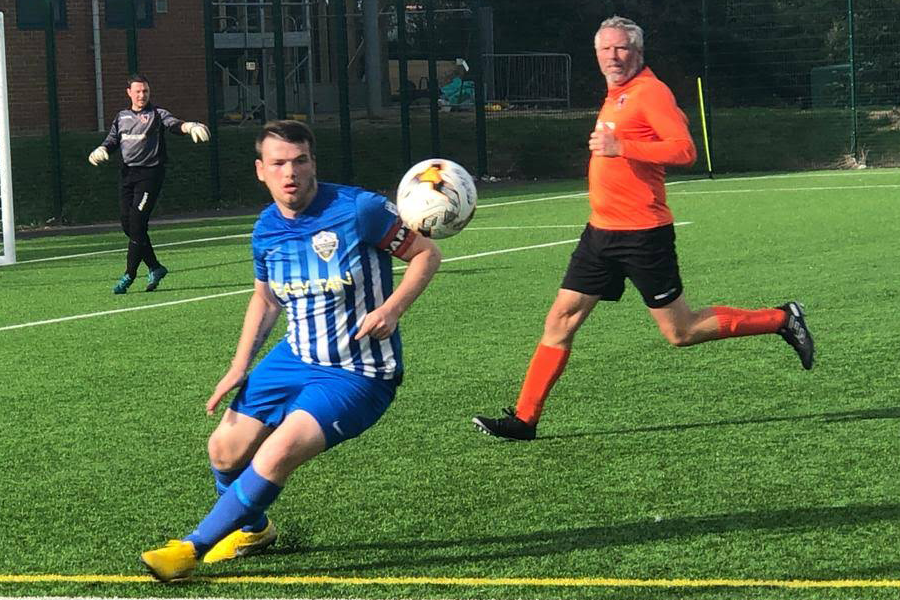 The attacking waves of crisp 1 and 2 touch passing flowed allowing wave after wave of attack.

31 minutes in Luke Darvill shot high over the bar,  but knew his goal was coming. 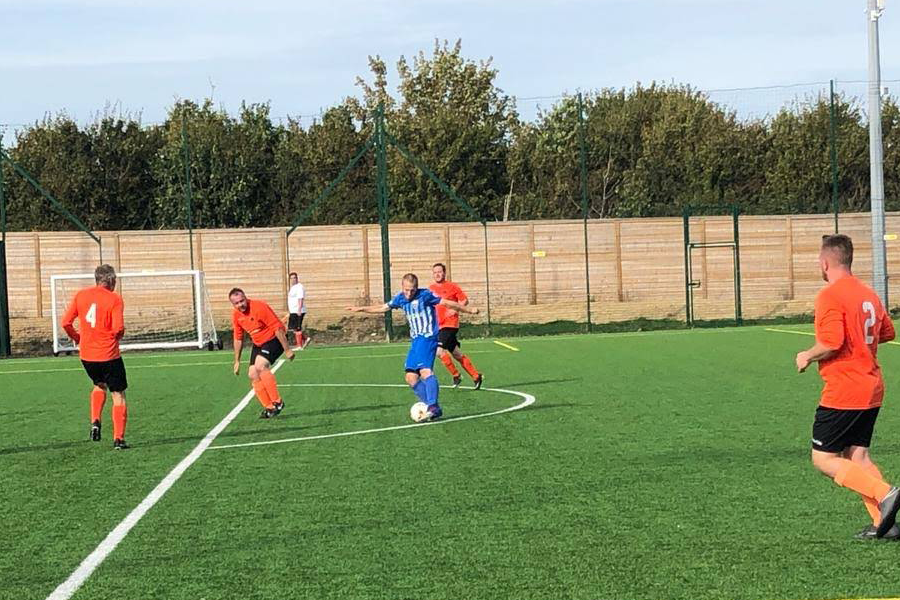 50 seconds later, Connor Easton picked up the ball from the left corner of the oppositions box and unleashed a stunning driving shot which smashed into the top right corner, 2-0 South Coast!

The strike was identical to last campaigns goal of season.

The action didn’t stop there,  not for a second. 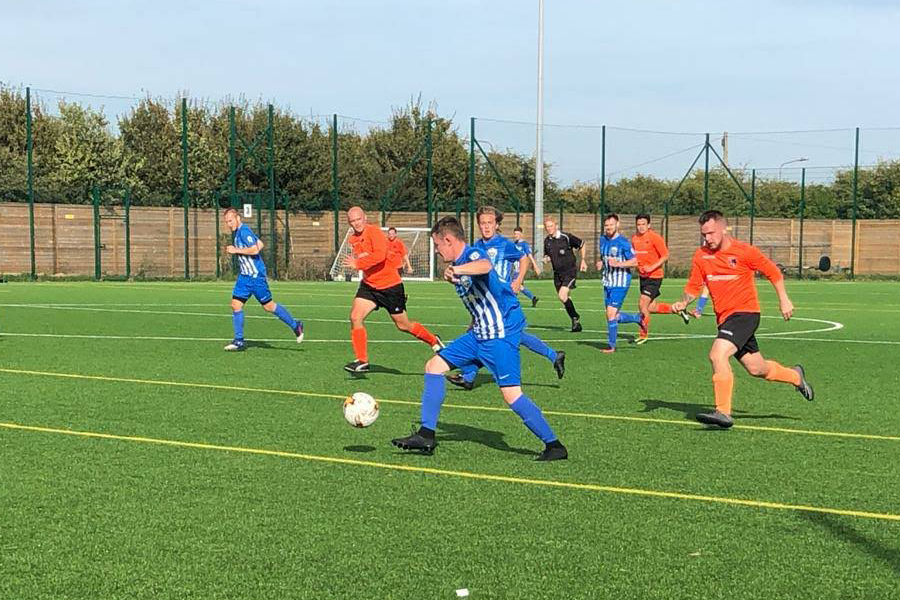 34 minutes in,  The Chopbacks won a long range free kick 40 yards out.  Up stepped the Captain Dayle Mcgurk who slammed a stunning effort that was just tipped over the bar by Orington’s heroic keeper.

Coast recorded another shot from the resulting corner but a goal was deserved and needed. 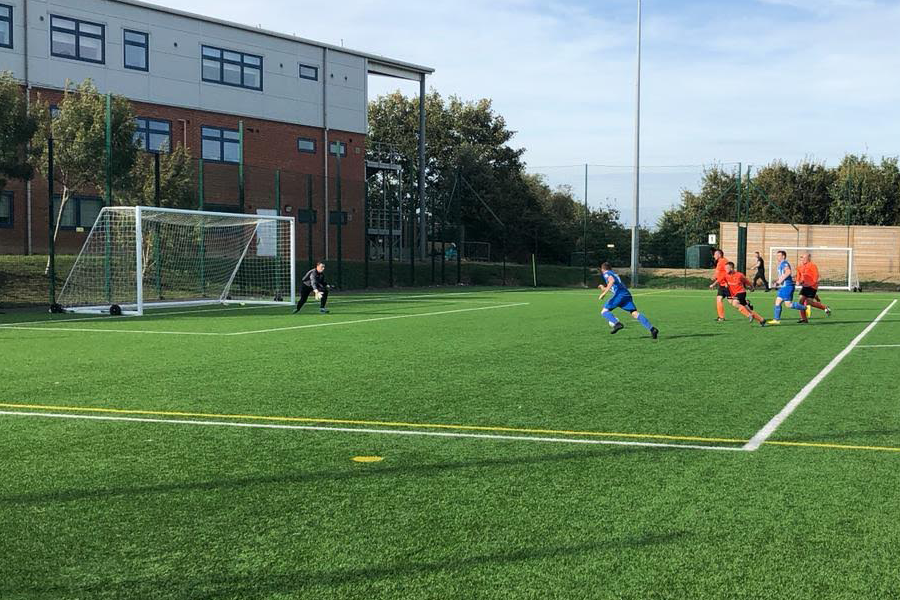 5 mins later Connor Easton obliged with a cool header from a high inswinging ball netting his second of the day to make the score 3-0 South Coast.

4 minutes from the break Orington had half a chance again hitting a ranged effort at Ben Tate who launched an attack landing at Luke Darvills feet who this time finished clinically with a delicious power strike from just inside the area into the top corner making it 4-0.

Connor Easton had another driven shot that looked certain to make the net budge but for a parried save falling to Ryan Penny to head in the rebound. 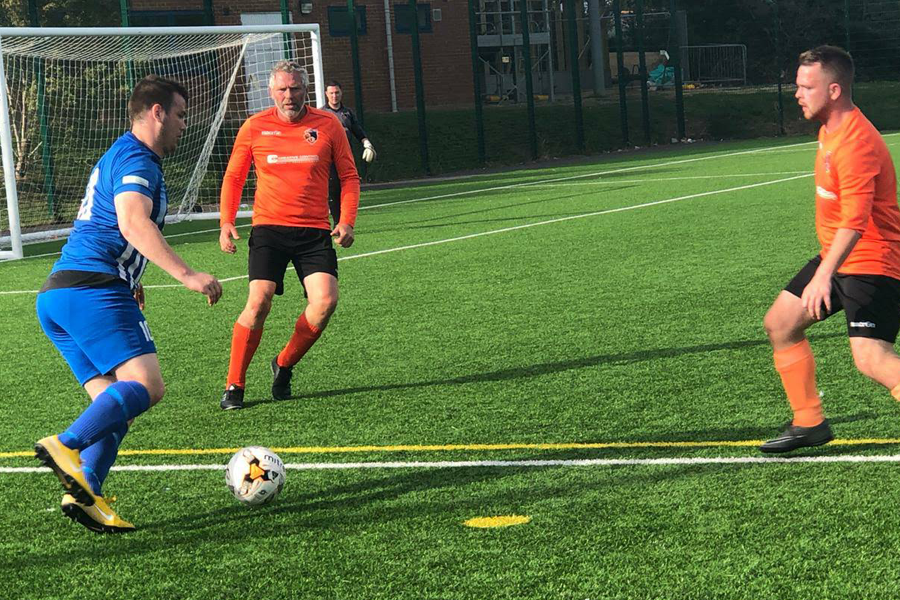 Sam Cook was stand in manager for the game and gave clear instruction to now command possession and see the game out.

For the first 16 minutes of the second half the lads played some inspiring passing playing Orington off the ball. 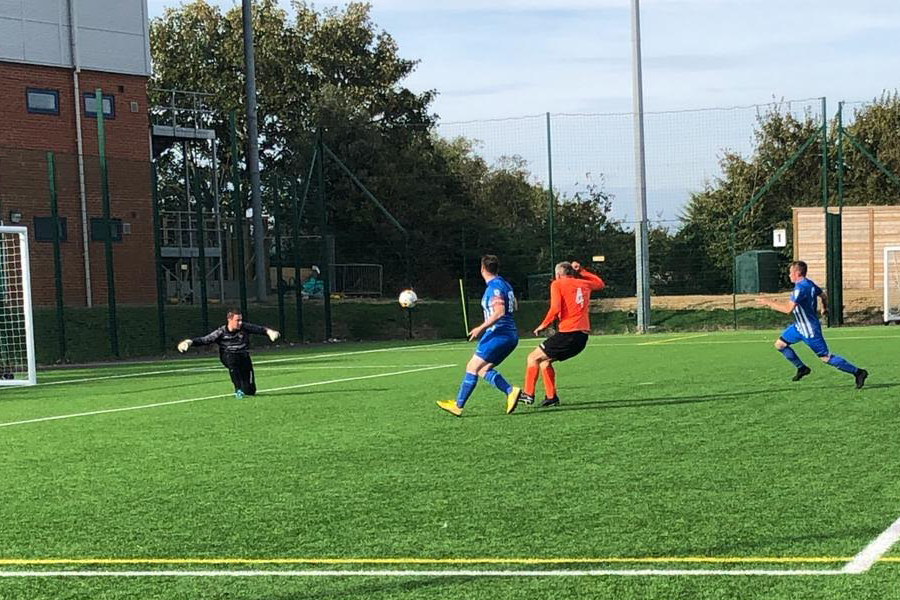 Their frustrations began to show and a few tempers began to boil,  so the Chopbacks reverted to plan A and attacked once more.

The ball pinged at Oringtons goal,  not held by the keeper and followed up by substitute Mike Hawley to slot home goal number 6.

Again from the restart Coast mugged Orington for the ball sending in Bradley Owens one-on-one with the oppositions keeper who stood his ground and saved well. 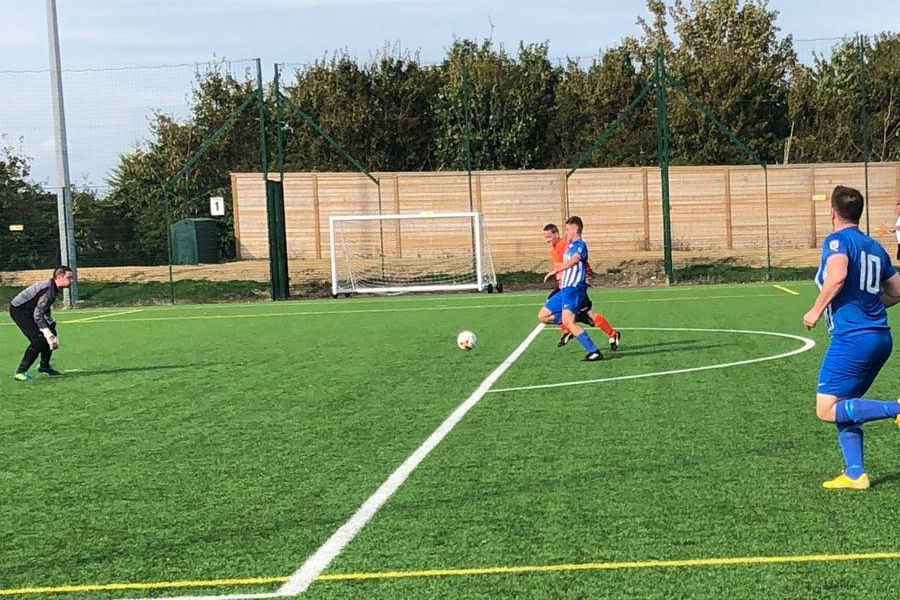 It’s a rare thing for Brad not to score but on the day it wasn’t to be.

His performance in midfield pulling the strings with Dom McGurk,  Ryan Penny and Harry Jackson should hopefully have fulfilled his appetite regardless.

The Orington keeper made a stunning double save to stop the score line getting silly. 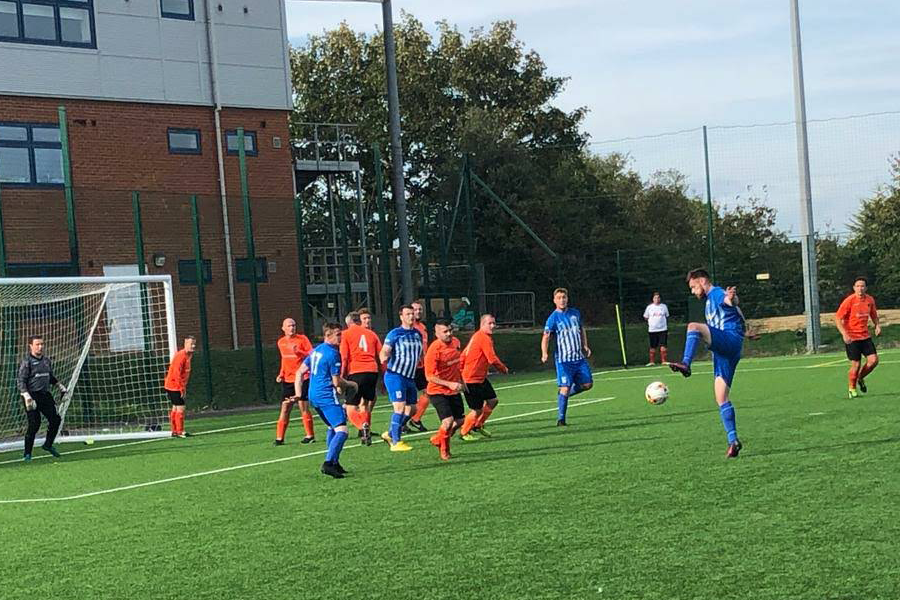 Then there was a curious moment when Luke Darvill shot from the edge of the box slightly to the left of center to see the ball fire out towards the right hand side corner flag….. Some say this was a cross,  some say a shot, if it was it must have been towards a goal at Bulverhythe by Coasts very own goal machine.

Moments later Luke had two bites of the cherry, a solid strike rebounding to be hit again just wide into the side netting.

11 minutes from time,  a great team passing move from the back gave Mike Hawley another sight of goal slamming the ball from the right handside of the box just wide to the keepers relief. 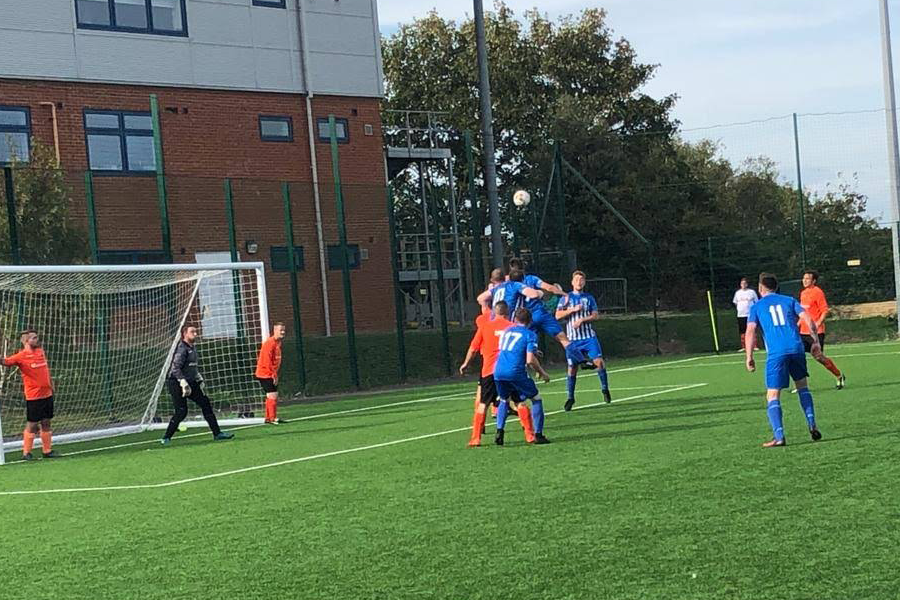 The last effort was speculative, a shot from the half way line by Byron Nichols who had played a stella game snuffing out Oringtons dangermen leading the defensive line for their second half.   The shot was off target but, worth a go.

Orington are a good club and to their credit never gave up which was admirable.

They will no doubt bounce back, their goalkeeper who will of course be disappointed by the loss,  should hold his head high as a lesser keeper would have picked out another 6 balls at least from his net. 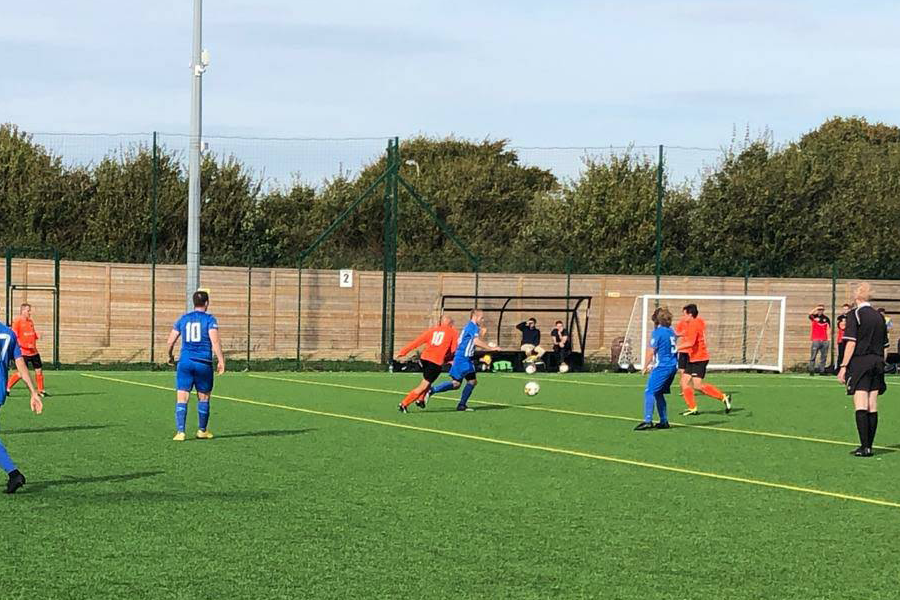 In summary then,  a much needed well earned solid response from last weeks defeat by Coast.

Next Saturday the Chopbacks travel to Eastbourne to play Victoria Baptists.