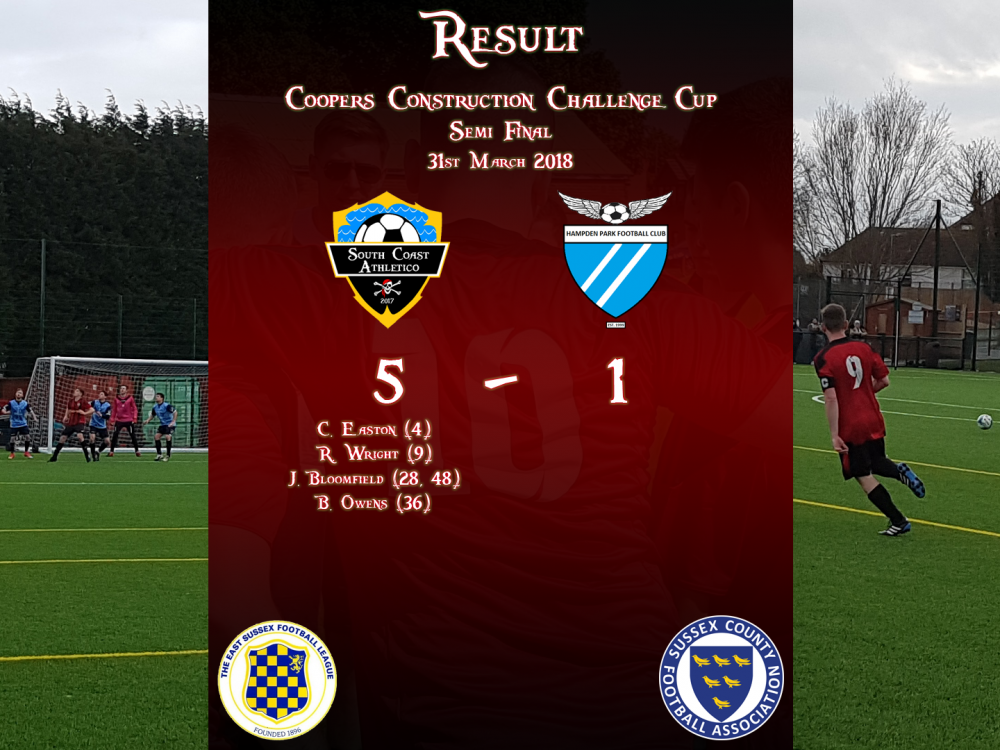 Chopbacks make it to the final

Fresh from their quarter final victory over Robertsbridge second team, the Chopbacks took on high flying division 5 team Hampden Park and it was the away side that showed why they look set for a spot in division 4 next season.

Short sharp passing through the Chopbacks bought numerous free kicks around the edge of the area but Goalkeeper Ben Tate was more than a match for everything thrown at him.

With that Early wake up call the Chopbacks tightened things up and when Charley Adams launched himself into 2 hefty challenges within seconds of each other the opposition knew they’d awoken the Bear and were in for a long day.

Connor Easton opened the scoring with a curling 20 yard strike which hit the top right corner after some excellent build up play, Hampden Park tried to reply quickly but were shut down by a stubborn Coast defence led by centre half general Dayle McGurk who’d placed Hampdens veteran striker so deep in his pocket it would take a rescue team to get him out.

As the half went on The Chopbacks grabbed a second through Ryan Wright who’d now scored in his last 3 games before Jack Bloomfield added goal number 3 for the game and goal 6 to his tally for the competition.

Before the Referee could blow his whistle for the half, South Coast added number 4 and pretty much sealed a final spot through recent signing Brad Owens.

The Second half started same as the first as Hampden Park tried to grab an early goal back but South Coast‘s midfield were having none of it, Captain Lee Finnigan, occupying a new defensive role was there to snuffle out any sort of idea of attack and launch the Chopbacks back down the other end, It looked as if South Coast were playing with more than 11 men as every time a Hampden Park player received the ball he was forced back by a red and black shirt.

Jack Bloomfield was set free down the right early in the second half and he happily slotted home goal 5 and his 7th in the cup.

Manager Neil Sutcliffe began to make changes as Luke Darvill came on for Brad Owens as the deck was shuffled and he almost had an immediate impact forcing the keeper into a great save from a header.

Hampden Park were awarded a penalty but the tall foreboding figure of Ben Tate put the striker off and the ball sailed over the crossbar reminiscent of Chris Waddle in Italia 90.

Harry Jackson came on to replace Mike Hawley and was straight into the action, after taking a challenge from behind from the opposition he returned the favour in typical Roy Keane fashion sending the opposition player into the air with a firm and solid tackle.

Ryan Fuller replaced Connor Easton and with his usual enthusiastic chasing forced mistakes from the Hampden fullback but unfortunately, nothing the Chopbacks could pounce on.

The Chopbacks couldn’t keep a clean sheet and Hampden park squeezed in a consolation goal minutes from the end, A 5-1 win and back to back fixtures against Orington in the league and cup to come, the Chopbacks have every opportunity to ruin Orington’s season.

Man of the Match
Lee Finnigan