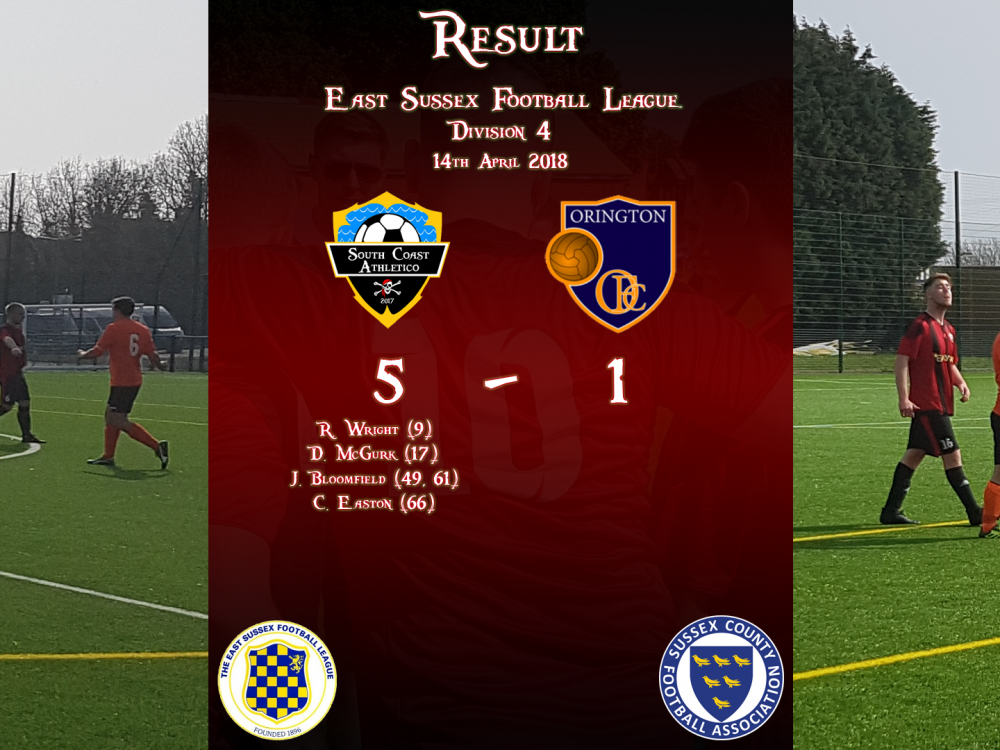 On a warm Saturday afternoon the Chopbacks took on Orington in what would have been a prelude to this Monday night’s Challenge Cup final.

Looking to show the early season win of 3-0 was no fluke the Chopbacks set out from the off creating half chances before Ben Tate sent a quick ball over the top on the 9th minute allowing Ryan Wright to latch onto the loose ball and slot past the keeper for 1-0.

Less than 10 minutes later Dayle McGurk shocked the ground by sneaking in and smashing the ball into the back of the net after a pass from Brad Owens who is quickly finding his home in the middle of South Coast‘s midfield.

The 2nd goal finally shook Orington into life as they ventured forward looking to half the deficit and it could so easily have happened but for superb heroics from Keeper Ben Tate throwing his body down into the feet of the oncoming striker taking man and ball with him.

More chances went begging in front of Orington‘s goal as the keeper was called into action time and again, The Chopbacks were looking relentless as they looked to ruin Orington‘s promotion party.

The half time whistle blew and the Chopback‘s were firmly in command as top of the table struggled to maintain them.

Changes of personnel as Callum Homewood and Harry Jackson left the field for Mike Hawley and Lee Finnigan to keep the midfield fresh.

Less than 5 minutes into the second half Jack Bloomfield put South Coast further ahead as he collected a through ball from Mike Hawley and in easy fashion rolled the ball into the opposite corner for 3-0.

Orington looked bereft of ides as they struggled to contain the Chopbacks.

Just after the hour mark Jack Bloomfield was on the scoresheet again for his 2nd of the game.

Connor Easton wrapped up the scoring for the Chopbacks as he grabbed yet another goal to add to his growing league tally.

The gloss was slightly taken away as Orington grabbed one back with a sliced cross looping into the far corner of the Chopbacks goal.

As the whistle went and South Coast left the pitch with a 5-1 win, we can only wonder what would have happened this coming Monday night as Orington escape playing a side who have put 8 past them in the past 2 fixtures.